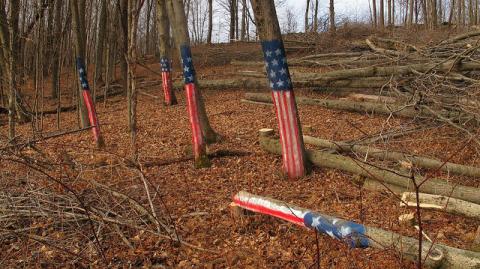 On April 22, the New York Department of Conservation refused to issue a water quality permit for the Constitution Pipeline, a 124 mile pipeline that would’ve carried natural gas from the Marcellus shale in Pennsylvania to New York State.

The chainsaws started up eleven days after U.S. District Court Judge Malachy E. Mannion dismissed contempt charges against the landowners on February 19. That order condemned the property and several others in Susquehanna County, Pennsylvania via eminent domain and gave Constitution Pipeline Company permission to cut without landowner permission. Energy Justice Network Director and attorney, Mike Ewall, assisted by National Lawyers Guild attorneys Terry Lodge and Larry Hildes, kept the property owners away from facing jail or fines that could have come with the pipeline company’s contempt case.

The Constitution Pipeline is a joint project of the Williams Companies and Cabot Oil & Gas.

On January 29 the Federal Energy Regulatory Commission issued a Notice to Proceed with non-mechanized tree cutting, but only for the Pennsylvania portion of the pipeline.

The construction of the vast majority of the proposed Constitution Pipeline had been postponed until October 1, reports NPR.

Although the longer New York segment of the pipeline has not been approved by the state, the cutting has destroyed 90% of the family’s production.

Energy Justice Network joined with the Holleran family that owns North Harford Maple, as well as other protesters, to oppose the tree cutting.

Go here to read more about the campaign. The website for the shale gas program is http://www.energyjusticesummer.org.