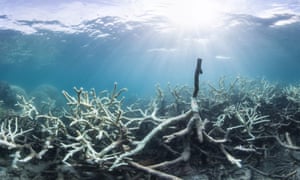 North Queensland tourism operators are routinely refusing to take media and politicians to see coral bleaching on the Great Barrier Reef for fear the attention will trigger a collapse in visitor numbers, it has been claimed.

Because that’s more important than actually addressing the problem. Wonder how many tourists care about seeing bleached reef?  How’s that gonna go down for Aussy government’s choices?  To the bitter end it will go.

“It seems to be quite prevalent, even amongst fellas that I know are truly green at heart and run eco-tourism operations where they put the reef first and foremost – they won’t talk with media, won’t take media out on their boat,” said Fontes.

Daniel McCarthy, a charter boat provider and president of the Cairns professional game fishing association, told News Limited that he and other operators objected to the Greens’ “publicity stunt”.

“They told me they wanted to see badly bleached areas, which obviously suggests they want a doom and gloom story,” he said.

“It’s quite obvious to me they want a very negative story to ramp up their argument about coal mining and are quite willing to sacrifice the reputation and thousands of jobs that rely on the health of the Great Barrier Reef to push another agenda.”

Hold the presses…. with 90% of it bleached isn’t that quite doom and gloomy?!   And uh yeah coal mining and the other fossil fuel endeavors are catalysing this, boys.  Maybe have a chat with a local scientist after all.