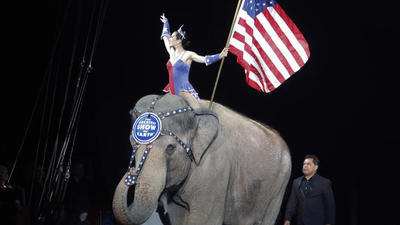 Ringling has been targeted by activists who say forcing animals to perform is cruel and unnecessary.

In May of 2016, after a long and costly legal battle, the company removed the elephants from the shows and sent the animals to live on a conservation farm in Central Florida. The animals had been the symbol of the circus since Barnum brought an Asian elephant named Jumbo to America in 1882. In 2014, Feld Entertainment won $25.2 million in settlements from groups including the Humane Society of the United States, ending a 14-year fight over allegations that circus employees mistreated elephants.

By the time the elephants were removed, public opinion had shifted somewhat. Los Angeles prohibited the use of bull-hooks by elephant trainers and handlers, as did Oakland, California. The city of Asheville, North Carolina nixed wild or exotic animals from performing in the municipally owned, 7,600-seat U.S. Cellular Center.

Times and attitudes have, thankfully, changed.  If you watch movies from before the 60s you can see the difference in how animals were treated.  The population of humans have grown.  The available habitat for wildlife has drastically decreased. The populations of animals of all types have decreased or gone extinct. It’s time to change.  All that aside, I remember taking my child to the circus at MSG and when we left I sword I’d NEVER go to another circus – period.  It just looked and felt wrong to see how animals were being treated.  We’re no way near elevated, evolved enough but it’s heartening to see these sorts of things come to an end.  Want to go to a circus  – try Circque du Soleil.