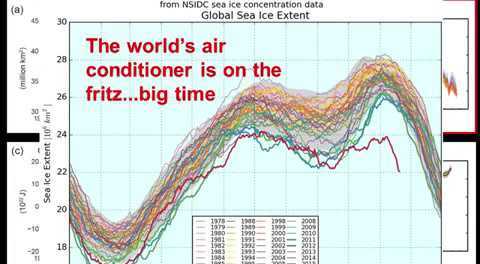 The record-breaking heat that made 2016 the hottest year ever recorded has continued into 2017, pushing the world into “truly uncharted territory”, according to the World Meteorological Organisation.

The WMO’s assessment of the climate in 2016, published on Tuesday, reports unprecedented heat across the globe, exceptionally low ice at both poles and surging sea-level rise.

Global warming is largely being driven by emissions from human activities, but a strong El Niño – a natural climate cycle – added to the heat in 2016. The El Niño is now waning, but the extremes continue to be seen, with temperature records tumbling in the US in February and polar heatwaves pushing ice cover to new lows.

2016 hottest year ever recorded – and scientists say human activity to blameRead more“Even without a strong El Niño in 2017, we are seeing other remarkable changes across the planet that are challenging the limits of our understanding of the climate system. We are now in truly uncharted territory,” said David Carlson, director of the WMO’s world climate research programme.