In 1962 Humble Energy, a division of the company that would go on to be known as Exxon, ran a full page ad in Life Magazine boasting about their ability to melt glaciers: 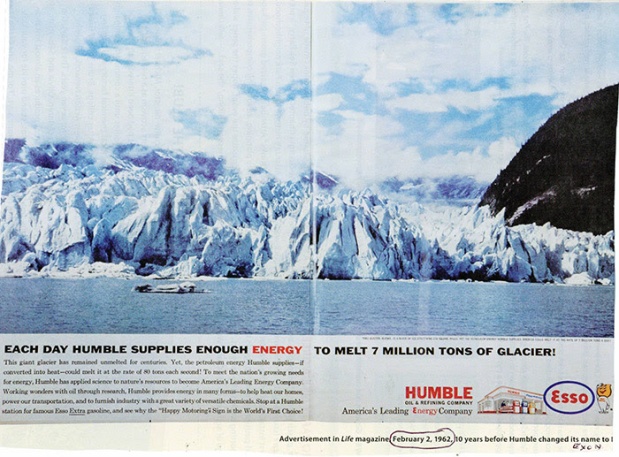 What Exxon didn’t tell anyone was that only a few years after running that ad, their scientists warned the company’s executives that CO2 emissions from burning fossil fuels really was melting glaciers, and that it they kept burning fossil fuels that would lead to devastating consequences.

And their scientists were right. As I write this, one of the largest ice shelves in Antarctica is at breaking point. A giant rift has been rapidly developing in the Larsen Ice Shelf for years, threatening to split the shelf in two.

The speed of the crack has increased dramatically in the past few months and scientists are expecting that any day now an iceberg more twice the size of than Luxembourg, or twice the size of Samoa, will calve off and collapse into the ocean, in one of the most dramatic displays of the destruction Exxon and their peers in the fossil fuel industry have unleashed upon the planet.

This collapse of the ice shelf was created by Exxon’s climate denial; it should be named after it too.

Call on the UK Antarctic Place Names Committee to name the iceberg that is about to form from Larsen C the #ExxonKnew Iceberg.

The UK Antarctic Place Names Committee is responsible for naming the Larsen Ice Shelf and they have a process for submitting place name suggestions. For every signature collected on the petition we will fill out a Antarctic Place Names Proposal form and submit it to the secretary of the committee.

Whenever the world thinks of the loss of polar ice, they should remember that #ExxonKnew; they knew the damage they were doing but spent millions delaying action anyway.

Make sure their greed and denial is not forgotten. Click here to put the #ExxonKnew Iceberg on the map.